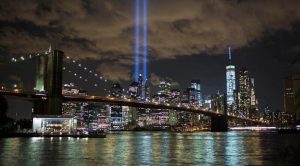 Today marks 18 years. September 11, 2001. I will never forget. But, have we begun to forget as a country? As the years roll on, are we pausing less to remember the day terror reigned down on us? Are we allowing the impact of that day to slip away? A new study suggests that Americans move on from mass shootings after just three weeks. This is 18 years.

At the moment I’m feeling numbness. These last few anniversaries I’ve begun to feel farther away, somehow more disconnected. Perhaps because I have created a 3,000-mile barrier between Manhattan and myself. I’m not entirely sure. Perhaps, like my husband has said speaking of his own 9/11 terror, that at some point it feels like your telling someone else’s story.

I’ve always been quick to point out that I was fortunate beyond measure on that incredibly beautiful, sunny New York day. And I truly, truly was. But it doesn’t mean that I have been ok. It doesn’t mean that I don’t STILL suffer from the post-traumatic stress of living and studying in the city during 9/11. 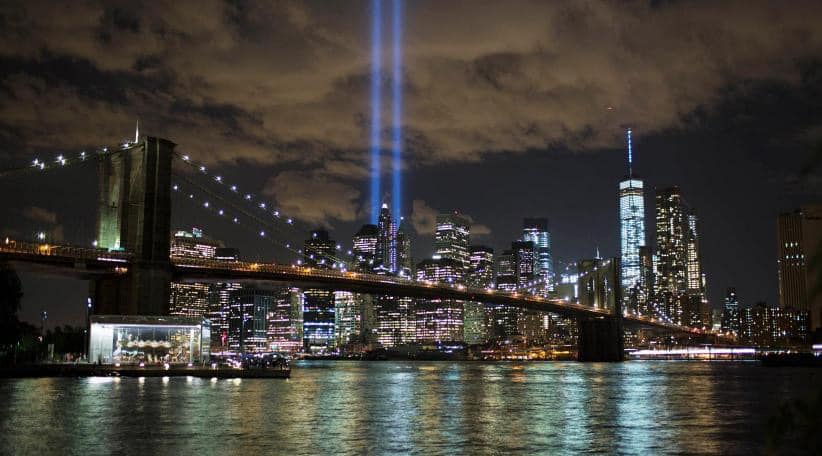 Every anniversary, if I sit still long enough, I can hear the short, chaotic breaths I was gasping, taking me back to third avenue as I ran north with thousands and thousands of others. Not a single taxi, bus, or moving car to be seen. Though the beating of my heart has quieted some, I still catch myself, immediately and unconsciously turning towards the sky when a jet engine seems all too close. I remember the smell. And the ash as it began to collect on my apartment’s windowsill.

September 11th took thousands of lives, robbed families of loved ones, and irreversibly changed more lives than anyone will ever truly know. I never really admitted, or wanted to admit, that fateful September day changed my life forever. I most certainly never thought someday, I’d marry a man whose life was not only nearly taken because of 9/11, but devastatingly, not truly ever recognized or supported as such.

Today, Rais and I have dedicated our entire lives trying to do our part to make a positive, peaceful difference for others. At home, I also strive to bring him peace, safety, and love as well. Just as so much of history has done before, our country’s 9/11 story is selective about who we remember and commemorate. I would certainly not eliminate a soul from the list, simply add other innocent human casualties to our roster. Too many suffered hate in the immediate aftermath of the terror attacks. To this day, so many more continue to be persecuted, harmed, and even killed because of the horrendous terror we experienced on this day, eighteen years ago.

Rais and I are working today, a day of service with thousands of others in the Dallas area. I will also take time to quiet my mind, and my heart, as I try to do each and every September 11th, sending love, light, and hope to all of those who lost their lives, lost their loved ones, have succumbed to illness, or are still battling, as the brave first responders and rescuers they were. I also remember the most touching, awe inspiring ways in which we, Americans and human beings, came together – even in the literal crushing of towers, utter chaos, and debris filled streets. We cared for one another mere minutes, hours, days, weeks, and all these years later.

I urge us all to Never Forget. I plead that we care for one another like we did that day. On this eighteenth anniversary, and always, take a few moments to remember how infinitely precious life is. Recall all those who so senselessly lost their lives. Reflect deeply on the compassion, care, and love shown so instinctively and powerfully by so many of our fellow Americans. And I would also urge you to think deeply about those victims, like my husband, who paid (and continue to pay) so dearly for someone else’s crime. Let’s not only recognize these victims of hate and violence, but embrace them on this day of remembrance, and always.