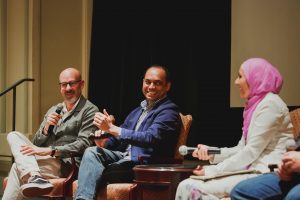 Rais Bhuiyan was shot point-blank in a near-fatal hate crime ten days after 9/11. Not only did he forgive his attacker, he also fought to save his attacker’s life.
Richard McKinney planned to detonate an explosive at a Mosque. After he was given a Quran, everything changed.

In a special film screening and discussion, hear from these two men who have traveled on unbelievable journeys from hate to love, joined by Joshua Seftel, the filmmaker who told their stories for the Emmy-nominated series of films, “The Secret Life of Muslims.” This event, moderated by Seattle’s own Aneelah Afzali, Executive Director of the American Muslim Empowerment Network (AMEN) at the Muslim Association of Puget Sound (MAPS), is a testament to the power of redemption, showing just how much is possible when we choose to overcome hate.

What is The Secret Life of Muslims?: If you watch CBS Sunday Morning, listen to NPR, use Facebook, read USA Today or attend SXSW, you’ve likely already encountered THE SECRET LIFE OF MUSLIMS, a series of short-form, first-person documentary films that uses humor and empathy to subvert stereotypes and employs a cutting-edge distribution strategy, making it available on TV, radio, the internet, and at live events from NYC to LA.

Featuring a diverse set of American Muslims from a wide range of ethnic and national origins speaking directly to their own respective experiences, the series illuminates the existing complexity and diversity of America’s 3.3 million Muslims, while pointing to a common shared humanity. The first season has been viewed more than 56 million times in our effort to contribute to a dialogue of tolerance and peace in contentious times.