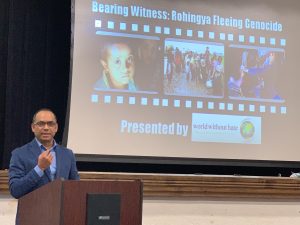 When Rais first heard about the Rohingya crisis, he was a flight cadet in the Bangladesh Air Force and couldn’t do anything except pray for these poor and vulnerable people. When the crisis resurfaced in 2017, he had already experienced the brutal pain of hate and violence firsthand being a victim of a violent post 9/11 hate crime. He had also gained a voice, and the strength to stand up against hate, injustice and human suffering. His heart broke seeing the plight of the Rohingya people and wanted to do whatever he could to help them, and to bring awareness to this catastrophic issue. About a year ago, Rais visited the camp to do relief work, as well as speak with many of the refugees who asked him to share their stories and their voices. As part of his promise to them, the documentary came to be.

Through the work of our non-profit, World Without Hate, we focus our efforts on breaking the cycle of hate and violence through storytelling and empathy education. The documentary short Rais created is our way of telling the Rohingya refugee story in hopes of bringing more awareness to and empathy for the millions who are barely surviving in what has become the world’s largest refugee camp. We may not be able to solve this humanitarian catastrophe ourselves, but together, we can send a collective message that we support the suffering, that we have not forgotten them or their plight, and we can utilize our voices and urge our leaders to act.

In this 15-minute short, Rais not only reflected the plight of the Rohingya and the millions who are barely surviving in the largest refugee camp in the world, but also proposed 5 points solution to end this senseless human suffering.

We also hope that bearing witness to the plight of the Rohingya reminds us of how much we have to be grateful for and in this, making the best use of our resources to help eradicate hate and violence from our communities, our nation, and our world. Together, we must stand up against human suffering.