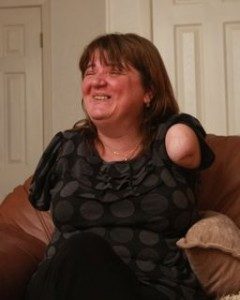 A posting on Belma Islamovic’s Facebook page says, “The only disability is a bad attitude.”  That is an impressive sentiment coming from a young woman whose arms were blown off in a Bosnian war shelling over twenty years ago. More impressive still is her view of the men who ignited and catapulted the shell that exploded into her dream of becoming a fashion designer, that robbed her of her youthful exuberance and her independence to do the simplest of activities like feeding and cleaning herself. These men who sent destruction to a vaguely known destination, to collide with people they didn’t know — she sees them as victims, too – victims of a war that robbed its participants of humanity.

I ask her where her story begins, and she answers, “when I lost my arms,” so we start there.

Belma remembers the date –  September 28, 1993 – a day etched into her skin. It had been  rainy that day in the city of Mostar, and her father Salko, a soldier in the Bosniak army, had just come from the line. Things were quiet, and he suggested that the family sleep upstairs that night in the apartment they had used for three months since being evicted from their own home on the wrong side of the Bosniak/Croatian line. Usually they slept in the basement to escape the shelling; Salko felt that was unnecessary on this evening. Everyone was overjoyed, but Belma’s mother Esma was uneasy. She had experienced a nightmare the evening before: she had seen her husband dressed all in white with blood stains all over him and had realized that they were attending Belma’s funeral.  The dream had been haunting, and she couldn’t shake the feeling. Still, it had just been a dream, after all, and things seemed calm enough, so everyone agreed to spend that night upstairs.

Belma takes a quick break from the story to fill in a few details. She talks about a childhood friend, a Croation boy who addressed her fondly with, “Hey, Bosniak!” and to whom she warmly referred as “the Catholic.” She talks about the Croatian soldier whose life was saved by her father when they were both fighting against the Serbs and the night he returned the favor by hiding Salko’s gun so that the Croatian forces wouldn’t find it and execute him.  She talks about the night the Croatian military came to the old family house on the other side of the line, how one soldier pointed a gun at her father’s head and pulled the trigger, and how her father escaped from that unscathed by the mere accident of moving his head away at just the right moment. She talks about the Croatian commander who suddenly realizes with regret that the family who has just been terrorized is the family of the man who taught him to read, write, and drive a car, and how, despite that, the family is forced the next day to pack a few items and leave the home forever.  She talks about living in the new lodging with no school and no electricity, going to the river for water and going to the hills for the care packages dropped from US planes.  She talks about ironies: giving blood at the neighboring hospital, visiting neighbors who had lost a limb, and wondering if it might not be worth it, getting injured in order to be brought to another a country, one that was not war-torn, one in which there would be enough food and water.

Back to the story of September 28, Belma relates how she was supposed to entertain a guest that evening.  She and a girlhood school chum had made plans; both were supposed to stay at Belma’s apartment that evening, but Belma was having misgivings.  Perhaps it was her mother’s dream, perhaps it was the unexplained queasy feeling in her stomach.  For whatever reason, she felt that she shouldn’t bring the friend home.  They met briefly and agreed to move the sleep-over to the next day.

Back home, Belma learned that her mother was with an aunt and her father was visiting a friend; neither would be home until late. One of her sisters suggested they take advantage of that absence to smoke some cigarettes, but Belma didn’t feel well.  She was drawn to the bed.  On second thought, the sisters were unusually tired, too. They all retired uncharacteristically early and were asleep by 9:00 PM.  At 9:20 the first shell hit.

Belma heard the shell in her sleep.  It had exploded in her front yard.  As she struggled to wake up, a voice told her to stay asleep, that the second shell was coming, and that she should remain lying down.  The voice may have saved her life because the second shell flew inches over her head and exploded on the wall behind her.  She felt excruciating pain in both arms, saw massive amounts of blood, and heard yelling.  Two neighbors ran into her house and carried her out to a car while Belma kept repeating in shock, “Don’t touch my arms,” and “I am going to die.”  One of the neighbors screamed into the night air, “You killed my brother a week ago.  You now want to kill my neighbor.”  Someone ran for gasoline and put it into the car.  The half mile drive to the hospital took a long time because the headlights could not be turned on lest they provide a target for more shelling.

At the hospital, Belma was immediately put on a table.  She saw her sister Selma brought in and said, “Save her.  If you can only save one of us, save her.  She is three years younger.”  The doctors informed her that her sister would be OK but that Belma needed surgery and they didn’t have enough stored blood because, in one of the many ironies of the story, Belma has O negative blood, the universal donor, the one that can accept no blood type but an exact match.  A neighbor who worked at the hospital went to the storeroom and came back with the needed blood, saying, “Here it is; why did you say we didn’t have it?”

And then she heard the voice of a dentist functioning as an all-purpose doctor.  “I’m going to do the right arm.  Who’s going to do the left one?”  Belma remembers hearing a chorus of volunteers, and then being put to sleep.

When she awoke, she tried to stand and was told to lie back, that they needed to get her parents.  When Esma and Salko arrived, they were crying, and she asked why.  They said, “There is something we have to tell you, “You lost both your arms.” She remembers her first response that it was over, that she no longer wanted to live, and her immediate urging toward vengeance, wanting to cause pain to the people who had caused pain to her.”

As Belma takes a breath and sits back remembering that lowest point, Esma takes advantage of the break to serve Bosnian coffee to go with the delicious meal and cake that she has inobtrusively placed in front of the visitors.  The foam is carefully spooned into each demitasse cup engraved with the wartime Bosnian flag, and then the rich dark fluid is poured on top.  I accept this gracious offer and sip some of the best coffee I have ever tasted.  Esma then takes a fork and breaks off a piece of the cake.  She brings it up to Belma’s lips in a practiced gesture that bears the imprint of many repetitions every day for almost twenty years, the two people functioning almost as one.  Esma follows it with the cup, and after sipping a bit of coffee, Belma resumes.

“I don’t think that anymore.  I now say, ‘I forgive you,’ but I want to tell about how it is not right, killing people.”  She adds, “He was not trying to kill me; he did not know me.  It’s like after 9/11.  People asked me who I was, and I said, ‘I am Muslim.’  They said then I was a terrorist.  I said, ‘I am a terrorist?  I lost my arms from the Christian people.  Should I call you all terrorists? No, I cannot do that. We need to love each other. We are supposed to help each other.’”

I ask how long it took her to get to this place, and she says that it was a process, but that the first step in that process happened while she was still in the hospital.

She remembers that a Croatian soldier had also been injured in the shelling, and that he had been brought to the same hospital.  “I don’t know how he learned my name, but I heard, ‘Belma, Belma!’ and I said, ‘Who is calling me?’ They told me, ‘That is the Croatian guy.’ He said, ‘I am thirsty; can you give me water?”  She remembers her mother’s outrage.  “My mom said, ‘How is she going to give you water?  You know that she doesn’t have any arms!’  I told my mom, ‘You are going to give him water.  He is not the one who hurt me. Help him, and God will help us.’”

Belma later became friends with this “enemy” soldier named Josip, and one day, after he had received a package from the United Nations, he again called, “Belma, Belma!”   He wanted Esma to serve as go-between, but this time it was to give Belma something – a precious commodity in those circumstances – a piece of chocolate.

Belma remembers asking, “Josip, why did you give this to me?”

She remembers his answer. “You were the first one to help me.  Even though you had lost your arms, even though you were badly injured, and even though it was my people who did that to you, you still didn’t turn your back on me.”  Belma sees this exchange as one of the key moments in her new life.  It was becoming clear to her that forgiveness improved not only her own life, it improved the life of her “enemy,” and if given half a chance, it would be the answer to improving the lives of everybody caught up in this web of needless war after needless war.  It was becoming a central tenet of her philosophy.

Since that time, Belma’s life has been rich with successes and failures, as most lives are.  She was overjoyed to be selected by Dr. Roberta Kalafut and her husband Dr. Edward J. Brandecker of the Hendrick Center for Rehabilitation in Abilene, Texas to be transferred to the US for medical treatment. She was disappointed that the prosthetic fit to her left arm was heavy, uncomfortable, and ineffective.  She moved to Dallas and was helped by refugee advocate Anne Marie Weiss-Armush to enroll in ESL and college classes, but she was discouraged by how difficult it was to study with no arms, and she dropped out.  She is closer to her mother than most 39 year old daughters are, but that closeness can sometimes be stifling.  She is grateful for the immense amount of support she has received from family and friends, but she yearns for the husband and children that she is unlikely to ever have.

Despite the rocky progress, Belma is fortified now by a sense of mission.  She wants to tell her story, especially to people who are angry with their losses or who are ready to give up.  She wants to say, “If I can do it under these circumstances, you can do it, too.”  She wants to stress the importance of giving up the need for vengeance and forgiving whoever has caused damage.  She says she feels that Allah is telling her, “If you want me to forgive you, you forgive others.”  When asked what she would wish for her attacker today, she says, “I would wish him to live a long, happy life.”