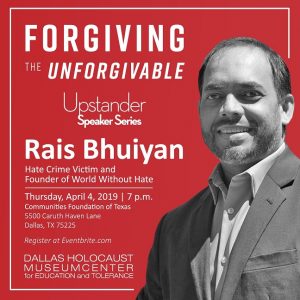 “Today’s rhetoric is hauntingly familiar of the Nazis when they created their anti-Jewish propaganda that ultimately led to the holocaust; exterminating Jews, communists, Polish-Catholics, Gays, Romas, priests, and others. During the Nuremberg trials, SS leader, Heinrich Himmler said, “The best political weapon is the weapon of terror. Men may hate us, but we don’t ask for their love, but for their fear.” We had to terrify our own people, force them to fear the supposed enemy, so no one would say anything when Jews and others were dragged out of their homes, snatched from the street and captured.

We are, once again, witnessing similar rhetoric, including those from our leaders and the media. Creating fear, labeling people as a threat, denouncing and dehumanizing them, seemingly making it easy to persecute, and as a society, we are to feel relieved the “BAD guys” are off the street.   My attacker repeatedly said that watching the same footage of the planes hitting the twin towers and listening to politicians blaming Muslims for 9/11 – he snapped, and took up arms against innocent human beings. At the end, he lost his life along with two innocent victims, brought tremendous pain and suffering not only to his victims and their families but also to his own, while those who inspired him still enjoy the benefits, they earned by selling hate and fear.  It’s the same story in Christchurch, NZ, Pittsburg, Charleston, Quebec City and the list goes on and on. What the terrorists seem to forget, every single time, is that through the devastation, heart wrenching pain and loss…we rise. We grow stronger and become more closely connected. We grab onto hope, harder than ever before. Humanity and love prevail. ” ~ Rais Bhuiyan