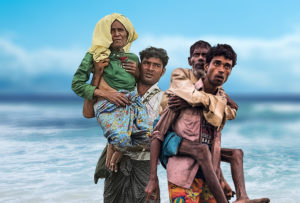 An eight-month-old cries out while his mother is gang raped by a “security” force and the soldiers silence the baby forever with a stroke of a knife.  This is not a gruesome movie scene; it’s part of the ongoing, silent genocide against Rohingya Muslims in Myanmar. More than 370,000 Rohingya people have already fled and more than 1,000 have been murdered by the Myanmar government since violence erupted.   Here is the ultimate insult: Nobel Peace Laureate Aung Sun Suu Kyi, the de facto leader of Myanmar who said she aimed “to create a world free from the displaced, the homeless and the hopeless” as she led the struggle to free Myanmar from its military dictator, is now sponsoring this massive, racist campaign of ethnic cleansing and terrorism.

“No one told me I was going to be interviewed by a Muslim,” Ms. Suu Kyi complained angrily after a BBC reporter questioned her silence on the slaughter of Rohingya Muslims. “I don’t think there is ethnic cleaning going on,” she said recently.  “It is a matter of people on different sides of the divide, and this divide we are trying to close up.” In fact, she has been closing this divide by systematically exterminating the Rohingyas, by treating them as lesser human beings.

According to the United Nations, the Rohingya people are among the most persecuted on the planet.  Despite living in Myanmar for generations, they have been denied citizenship and basic human rights.  Pope Francis voiced his concern saying, “they have been suffering for years, they have been tortured, killed, simply because they want to continue their tradition, and their Muslim faith.”  And yet, their suffering has not spurred action or touched enough human hearts.

Despite the United States’ Holocaust Museum’s concerns of a possible risk of genocide in Myanmar and the joint UN, Amnesty International and Human Rights Watch report on ethnic cleansing and crimes against humanity in that country, the media has only reported the bare minimum of the plight of these innocent victims.  News reports often falsely characterize Rohingya resistance efforts as terrorist acts.

Before more misinformation is reported, before an entire people is exterminated, the United Nations, world leaders, religious and secular institutions, and individuals of conscience should expose and work to eradicate this senseless human suffering. I urge everyone to call for the following:

Without immediate action, more people will die.  Left unchecked, this crisis could reach the proportions of Rwanda, Bosnia, Kosovo, and Darfur.  It is Ms. Suu Kyi’s responsibility to demonstrate the same mercy, kindness and compassion she preached during her struggle to free the Myanmar people.   World leaders and institutions should hold her accountable for stopping this massacre and upholding the principles she spoke of during her 2012 Nobel Peace prize acceptance speech, which currently rings hollow given her prominent role in causing Rohingya suffering.