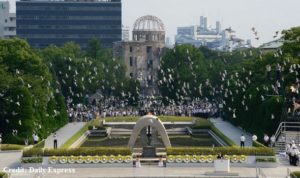 When temperatures reach triple digits, we feel miserable, but four digits are beyond fathomable. Now imagine, suddenly your city’s temperature rises to 7,323 degrees Fahrenheit (4,000 degrees Celsius). You burn instantly. That’s what happened to the people of Hiroshima on Aug 06, 1945. The “Little Boy” showed the entire world its enormous destructive capacity, taking 140,000 lives. A dark chapter in human history to be sure.

World War II is over, but the scars, traumas, and threats of evil still exist. The massive destruction of that war and the degradation of humanity was clearly not enough loss for us to come to an understanding and agree to avoid war, find solutions to conflicts through dialogue and save human lives. It’s never too late to do the right thing.   After 72 years since the Hiroshima nuclear bombing, we can still urge our leaders to find ways to abolish Nuclear weapons, instead of spending money on maintaining the existing 15,000 stockpile and further production. We should utilize our resources on peace building, educating one another about the power of mercy, compassion, forgiveness, acceptance and understanding. Let’s (new) clear the world from hate, violence, and ignorance by teaching empathy, mercy, and forgiveness, and building the world we all deserve – a world without violence, a world without victims, and a world without hate.   ~ Rais Bhuiyan